The phaser hissed, and Tom Paris flexed his arm minutely to accommodate the infinitesimal recoil. Dropping to a crouch, he flicked his eyes over to his left.
Chakotay grinned viciously at him, even across twenty meters of smoking ground the expression was effective. Tom grinned back, shifting his weapon from hand to hand, senses ranging with practised efficiency into the spaces around them, looking for trouble.

Given a few minutes to assess their situation, Paris exhaled explosively. They should be dead. Very dead indeed. Outnumbered, out-gunned, cornered and low on resources, he and Chakotay had been holding their position for nearly an hour. The adrenaline was still sluicing through him, he could taste the metallic tang of blood in his mouth, smell the sweat soaking his clothes. Breathing in shallow, panting gusts, he edged a foot out from his cover, raising his phaser in front of his face in a two handed grip.

The volley of shots arced over him, aimed dead on target, if a little high. Tom rolled, phaser spewing energy as he registered a warning shout from his left.

"S'ok" he yelled, curling more tightly into a crouch behind the shuddering hulk of the abandoned transporter as it absorbed the fury of the weapon being discharged in his direction.

He heard movement beside him, and turned to defend himself. As he changed focus, desperately trying to ready himself for a close-quarters attack, he found himself nose to nose with Chakotay, half sprawled on the ground, already coiling and twisting into a defensive position beside him.

"Holy shit! I could have shot your face off! Let me know when you're next having suicidal impulses. I'll let you fire the fucking weapon yourself. Much more satisfying."

Chakotay chuckled as he checked his phaser.

"Sorry Tom. Had this overwhelming need for some company. Was getting a bit lonely all by myself. You know me - can't stand to feel left out."

As he spoke, close enough to Tom that he could feel the whispers on his face, like a caress, Chakotay was inspecting his phaser with increasing disgust.

"Mine too." Tom was aware of a sudden thrill of fear threading through his thoughts.

"Enough for a last stand? "

"A last crouch." Tom's smile hardened. "Don't much fancy standing up with that lot out there. They can damn well come and get us."

Chakotay nodded, running his fingers through his hair.

Both men glanced at each other, and the eye-contact flared into heat.

"This mortal danger thing is *intense*" Tom muttered, wanting inexplicably to touch the face a few centimetres from his own. He couldn't tell if the catch in his voice was terror or something more interesting.

The hand he reached forward was the one holding the phaser, and Chakotay flinched a little as the nose of the weapon slid down his cheek. Tom smiled, letting his teeth show.

Tom repeated Chakotay's earlier assertion, enjoying the answering laugh from the man whose body was so close to his own that he could almost taste evaporating sweat.

The attack was expected, but the explosion of noise into the intensity of the moment was a still a shock. Adrenaline surged again, and the two men raised into a crouch as if one body. They had enough power for about three minutes of sustained firing, and without the need for discussion, both men knew they were going to make a last break for the shuttle door.

With the ease of practise and training, they worked as a team, covering and firing in almost choreographed symmetry. Tom felt a chord of exultation as he rolled and fired, knowing that Chakotay was behind him, beside him, *with* him.

He felt the burn of an energy burst erupt in front of him, and flung himself through it, choking on the dust and smoke, momentum carrying him forward. Coughing and swearing he lunged, hands making connection with the sweet solidity of duranium.

The air crackled with ionic discharge around him as he hauled himself upright, scanning through the chaos for the other figure he know should be close by. He was alone in the doorway.

Tom heard the pain in the shout, and the warning. He had a sudden, shocking flash of arousal, his skin crawling with the heat of it as he stepped away from the safety of the shuttle, casting about in the choking fumes, aware of the annoying beep of his phaser as it informed him of its imminent demise.

Chakotay's voice had an edge of anger, a flash of the superior officer, but Tom ignored the implied order, and continued to search through the haze, peripherally aware of the noise of the approaching enemy.

Tom stumbled and grabbed, tangling his hands in shredded fabric, ignoring the sickening slide of fluid between his fingers and the soft grunt of agony as he pulled the alarmingly dead weight towards the shuttle doorway.

"Sorry Chakotay. Get a bit lonely all by myself. Need someone to chuckle wryly at my witty remarks. You know how it is..."

The phaser went silent in his hand as he tasted the dry, cool air of the shuttle, dragging it into his lungs, feeling his head clear a little. Letting Chakotay slip from his grasp, he shoved the commander unceremoniously across the doorway, grabbing for the second phaser that was being weakly offered from a blood-soaked hand.

Tom fired one last, sweeping blast, watching the power surge and collapse across the three aliens advancing on the shuttle. They fell back, roaring and keening their loss.
The shuttle doors slid miraculously shut, and Tom realised that Chakotay had crawled to the control panel. Blood glistened on the padd, and Tom slumped down beside him, suddenly very frightened. His body sang with sexual tension, he could taste it.

Chakotay's eyes were closed, his head leaning back against the reassuring solidity of the bulkhead. A smile twitched at the corners of his mouth, moisture beaded his upper lip. Tom fought the urge to taste it, licking his own lips reflexively.

The voice was surprisingly strong.

"Yep. As long as those damn creatures haven't messed with the propulsion systems. I think they were probably too busy trying to fry our asses."

As he spoke, he was moving towards the pilot's chair, using the adrenaline still flooding his body to finish their escape.

Once they were off the ground, the autopilot was locked in, and he was satisfied that there was no pursuit from the landing camp, Tom made his way back to Chakotay's side.

Eyes still closed, hair slicked with blood and sweat, skin clammy with shock, Chakotay looked very vulnerable. Tom sighed, his fingers searching for a pulse in the shadowed hollows of the man's throat. His fingers never made contact with skin, as a hand snapped out and caught his wrist in a savage grip.

Tom inhaled sharply, suddenly the air was thick with the smell of blood and desire.
Chakotay's eyes were somehow open, and Tom was falling, falling into the ferocious heart of the stare that skewered him.

"Fuck." A statement. A question. A plea.

"I know." An agreement. An answer. An offering.

The residual chemical high throbbed dully behind his eyes as he was pulled inexorably closer to the face beneath him, and Tom exhaled carefully as he slid trembling hands along corded neck muscles, into slippery hair.

He could feel a surging beneath him, inside him, and as he felt Chakotay's mouth opening under his own, the lance of flesh thrusting upwards, he moaned in a kind of triumph. The sound was lost in the agony of lust that swept through both men, fusing them in a hard, frenzied coupling that lasted no time at all, and reverberated endlessly.

It was always like this. Danger, desire. Anger, arousal. Fear, fucking.

The best sex imaginable, fierce and frantic and fantastic. Flying on the hormonal high, exhausted and terrified and so utterly, completely in tune that words were never needed.

In the end, though, there was just the simple feeling of connection. The calm after the storm. Coming down from the adrenaline rush. Familiar exhaustion.

"How long before we get within range of Voyager?"

Chakotay's voice was a warm breath against Tom's throat, his head a blissful weight on his shoulder. Tom angled his head so that Chakotay slid closer, until he could feel that mouth against his skin.

Tom reached out and lifted the blood-encrusted fingers to his face, turning the hand gently and kissing the scorched palm.

Chakotay sucked the words away in a rough kiss, and allowed his mouth to trail down Tom's trembling jaw to rest back at his throat.

Chakotay managed the wry grin that he knew Tom expected before he slipped into the welcome arms of oblivion. 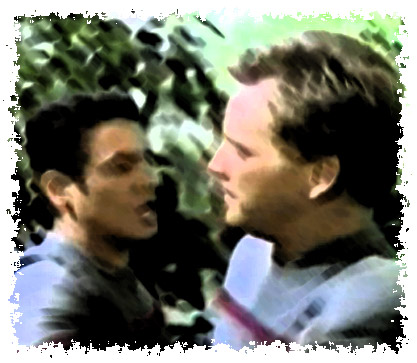