As the doors hissed shut he was on him, fast and hot and relentless. Breathing hard, Tom pushed ineffectually at the hands that grasped him, his palms suddenly wet with sweat.

"Chakotay...for fuck's sake...not here..." he heard his own voice, low and urgent. Dragging his mouth away from the bruising sweetness of the Commander's, Tom twisted until he had his shoulder against the chest that pinned him to the turbolift wall. Every second that passed moved them closer to the bridge as the lift sped soundlessly upwards, silent apart from the ragged breathing of its two passengers.

Fighting for control, Tom twisted again, feeling Chakotay's erection pushing against his thigh, the hard length of it warm through the thin uniform fabric. Grinning savagely, Chakotay ran blunt fingers down the side of Tom's face, in a gesture that always undid him.

It took all of Tom's self-control to get the words out, as Chakotay's fingertips insinuated themselves inside the collar of his uniform.

"Janeway will throw us in the Brig, you bastard..."

Most of Tom's resolve had evaporated at the first slide of skin on skin, and Chakotay's quiet pleading, in sharp counterpoint to the force with which the Commander held him against the turbo-lift wall, burnt off the last shreds of resistance. Not needing to answer with words, Tom turned in Chakotay's fierce embrace, letting his head drop until his forehead met the cool metallic wall. Opening his uniform pants with one hand, he bent his body forward, braced against the wall with his free arm.

Quicker than Tom had anticipated, Chakotay was inside him, using the agonised arch of Tom's back to thrust deep and long, a desperate moan dragged from his throat as hot flesh sank into hot flesh. Reaching round, the Commander enclosed Tom's cock with the same blunt fingers that had just stroked his face, and the effect was similar, if a little more pronounced.

Very deep inside him now, Chakotay stilled, motionless for a single moment, then Tom felt the tension in the shaft of flesh that speared him as the Commander came, pressed against his back like a second skin, moaning his name like a mantra.

Without a word, the men pulled apart, adjusted their uniforms and stood across from each other as the Turbolift resumed its journey. eXtremely casually, Tom glanced at Chakotay, his eyes widening as he watched the Commander delicately licking his fingers, a smile playing at the corners of his mouth.

"You never cease to amaze me, Chakotay - you crazy, fucked up, dangerous, scary, sexy bastard..."

Any reply was swallowed as the turbolift slid to a stop, the door hissing open onto the Bridge. 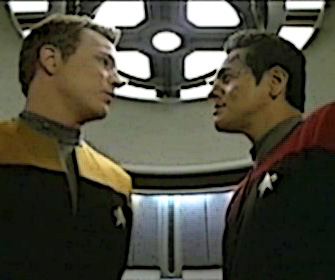